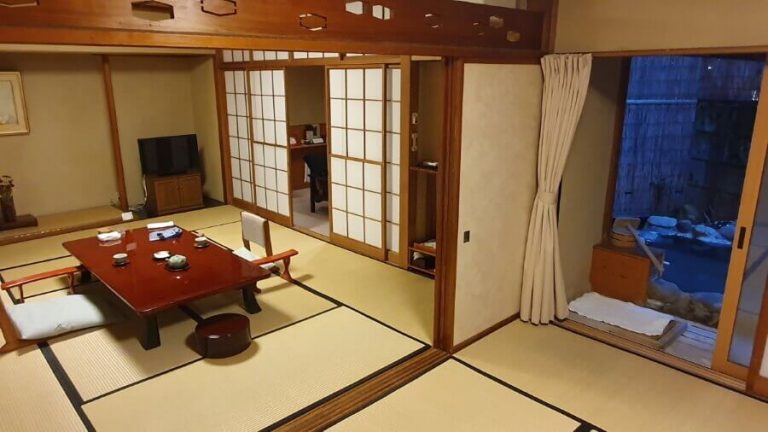 For as long as I have been fascinated by Japan I wanted to visit and stay at a traditional Japanese-style inn also known as a ryokan, and on my last trip across Japan I finally had that opportunity. After spending a few days in Tokyo, I set out for my next destination, Nagano Prefecture, and my accommodation there, ryokan Shibu Onsen Kokuya that was established in 1625 and is currently overseen by the 16th generation of owners. After a 3 hour bus ride and the short trip with the train, I arrived to Shibu Onsen, a small mountain town famous for its hot springs and snow monkeys. I was a bit tired from the journey, so I was happy to see that the staff from Kokuya was waiting for me at the train station. Kokuya itself is located only 5 minutes away from station by car. Upon my arrival to Kokuya I was greeted by several members of the staff, and I have to say I was quite impressed by the look and the feel of the whole place. It felt like I had travelled back in time and was now enjoying the wonders of traditional Japan. After checking in I was led to my room where the friendly staff explained to me everything I needed to know about staying in a traditional ryokan. For example, how and when to use many different baths they have there, how to dress in a traditional way, when to show up for breakfast and dinner, and many other tips. All in all they were very helpful. Welcoming tea was prepared for me, as well as some snacks. I also received a traditional Japanese clothing, yukata, to wear inside the ryokan and around the town.

The kind staff at Shibu Onsen Kokuya offered me a guide who would show me around Shibu Onsen and the surrounding area. During the course of that day I visited many interesting places, one of which was the famous snow monkey park located nearby – Jigokudani Monkey Park. There you can see Japanese snow monkeys bathing in the hot spring. I also visited the onsen sources that supply the whole town, and climbed to the top of Mount Yokoteyama whose height is over 2 kilometers. There I had lunch in the highest Japanese Bakery! Also I had a chance to visit the a volcano that is located nearby. You are not allowed to approach too close to it since it erupted in 2018. After that, I explored the town itself and I have to say it was one of the most unique places I have visited in Japan. All of the houses were made in a traditional way, with small stone streets and tiny alleys criss-crossing the town. They were many souvenir shops and hot springs all over the town. As a matter of fact, there are 9 public hot springs in Shibu Onsen which I could access for free with the key that was given to me as a guest of Kokuya.

After my sightseeing was completed, I spent the rest of the day relaxing in many baths that Shibu Onsen Kokuya has to offer. In fact, they have six public and two private baths that use free-flowing hot spring water from six different spring sources, and the guests can enjoy all of them. Keep in mind that half of the public baths are for men and half for women, however, every 12 hours they change. Once again, the traditional Japanese dinner prepared by the staff of Kokuya featured a wide variety of meals and was absolutely amazing.

All in all, I immensely enjoyed my stay at Kokuya. It is probably one of the most unique experiences I have ever had. It felt like I really traveled back in time and discovered the traditional of side of Japan. I wholeheartedly recommend you to check out Shibu Onsen Kokuya and see for yourself all the amazing things it has to offer. If you want to experience the traditional side of Japan I suggest you book a stay at this unique place.