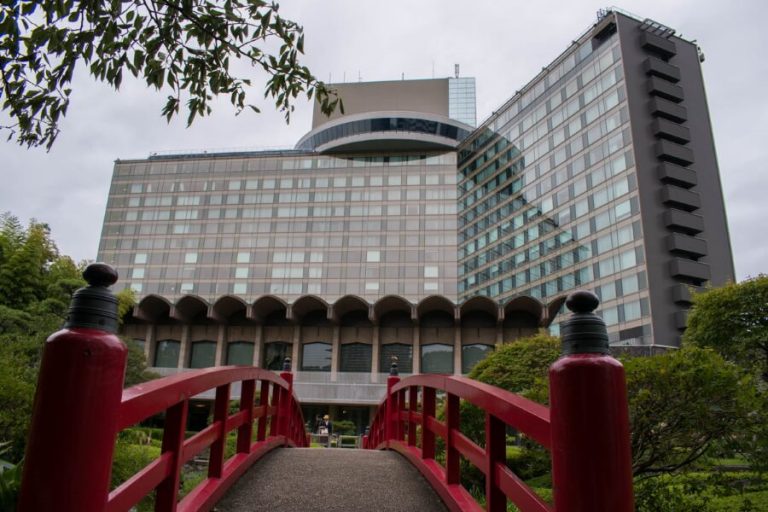 Hotel New Otani Tokyo is a luxury hotel located in Tokyo’s Chiyoda City which I visited during my trip across Japan. I arrived there after spending a few days exploring Asakusa and Ueno so I was quite tired. Fortunately, this great hotel is easily accessible and is located only a short walk from the Akasaka-Mitsuke station. Hotel New Otani Tokyo is spread out over several buildings and these are the New Otani Garden Court, New Otani Garden Tower, and the Main in which I stayed. The hotel also features a large Japanese traditional style garden that is over 400 years old. Hotel New Otani Tokyo is truly a large hotel, probably the biggest one I visited during this trip, and it can provide world-class accommodation for more than 2,000 guests. Not to mention a variety of different restaurants, bars, and meeting places.

After the check-in, I was escorted to my room, and I have to say I was quite impressed by the luxurious hotel interior and its aesthetics. It was clearly inspired by a fusion of traditional Japanese and modern Westerns style and had a myriad of interesting artworks, flower arrangements, and stylish furniture, etc.

The room in which I stayed was a “Shin-Edo” located on the 10th floor and had a view of the aforementioned Japanese garden. When I first entered the room, I was blown away by its size and everything that was in there. First, the main area itself head twin double-sized beds and a huge flat-screen TV. Also, there was a work desk, a few chairs, a small table and the rest of the furniture that you would expect in a hotel like this one. There was also a huge closet which I found really convenient since I could leave all my luggage there and, by doing so, reduce the amount of mess in the room. I was also impressed by the bathroom since it was quite spacious as well, and included a separate compartment for the bidet toilet, and another one which was a big shower. The room even included a Japanese traditional cypress wood bath. I loved taking a traditional style bath after a whole day of sightseeing. There was even a large window in the bathroom that enabled me to view the garden and the rest of the city through the room if I wanted to. If you are worried about privacy, don’t be, you can easily lower the window blinds using an automated switch. The same can be applied to the two large windows in the room, you can lower them with the flip of a switch. As you might expect, the room was filled with a wide variety of amenities such as free Internet access & Wi-Fi, in-room safe, refrigerator, Japanese tea set, hairdryer, towels, pajamas, bathrobe and a large number of consumable toiletries. I also got some free complimentary snacks and drinks, including Japanese sake. All in all, this was one of the most luxurious rooms I stayed during my trip and I loved every minute of my stay there.

When I first arrived that day, I didn’t even want to go sightseeing, instead I just relaxed and spent the rest of the day in the room. The only place I visited was the garden itself which is definitely one of the selling points of this great hotel. The Japanese garden at Hotel New Otani Tokyo has a history of more than 400 years. The garden is decorated in a traditional style and contains flowers and many kinds of rich foliage that bloom or change colors from season to season. There are also several ponds containing beautiful, and quite large koi fish. In the middle of the whole garden, there is a big waterfall which is a perfect place to take some unforgettable photos.

One more great feature of the Hotel New Otani Tokyo is a large number of restaurants, bars and lounges incorporated into the hotel. On my first night I went to the buffet restaurant “View & Dining The Sky” located on the top of the hotel. This great restaurant offers Japanese, Western, and Chinese dishes with a 360-degree view of the surrounding area so you can indulge in tasty meals while enjoying the spectacular view of Tokyo.

The next morning I headed out to a restaurant “Satsuki” to grab some breakfast. Since I was the guest of the hotel, I had coupons for a complimentary breakfast buffet. I loved the wide variety of meals they offered, both Japanese and international. They had many of my favorite meals like pancakes, french toast, and omelet. Also, I was quite impressed by the many desserts they have such as puddings, different kinds of fruit, cakes, and many other things. I immensely enjoyed that breakfast and made sure to eat as much as I can, to be ready for the day of sightseeing ahead of me. That day I explored the surrounding area which included, among others, the Imperial Palace, Tokyo Station, and Kanda Shrine. Even though it was quite fun and educational, I was looking forward to getting back to the hotel. After finally arriving, I had a hot bath and headed out to another restaurant. This time I visited Trader Vic’s, a nice restaurant decorated in the South Pacific style. There you can enjoy specialties such as smoked meat, fish and fowl.

However, this world-class hotel has many other things to offer apart from the restaurants and bars. For example, they have the one of the largest outdoor hotel pools in central Tokyo, which you can use during the summer. It also features a Golden Spa where guests of the hotel can enjoy the gym, sauna, and an indoor pool at a visitor’s fee. There is also a Red Rose Garden located on the rooftop which houses over 30,000 red roses, and as you might have guessed, that is a great place to take breathtaking photos. The hotel is truly gigantic and has many more facilities such as beauty salons, fashion shops, drug store, several clinics, a photo studio, convenience store, and many meeting and event halls. It almost feels like a small city.

My stay at the Hotel New Otani Tokyo was an unforgettable one. This hotel has so much to offer, from the amazing room and the beautiful garden, high-class restaurants and lounges. The high level of luxury and service they offer was truly amazing and I suggest to everyone who wishes to stay in this hotel to check out their website to learn more.