Hotel Chinzanso Tokyo is a luxury hotel located in Tokyo’s Bunkyo City. It is famous for its excellent service and a wonderful garden which gets transformed into a “Sea of Clouds”.

During my last trip across Japan, I stayed in this “Hotel in the Clouds” and now I am happy to tell you what it was like! 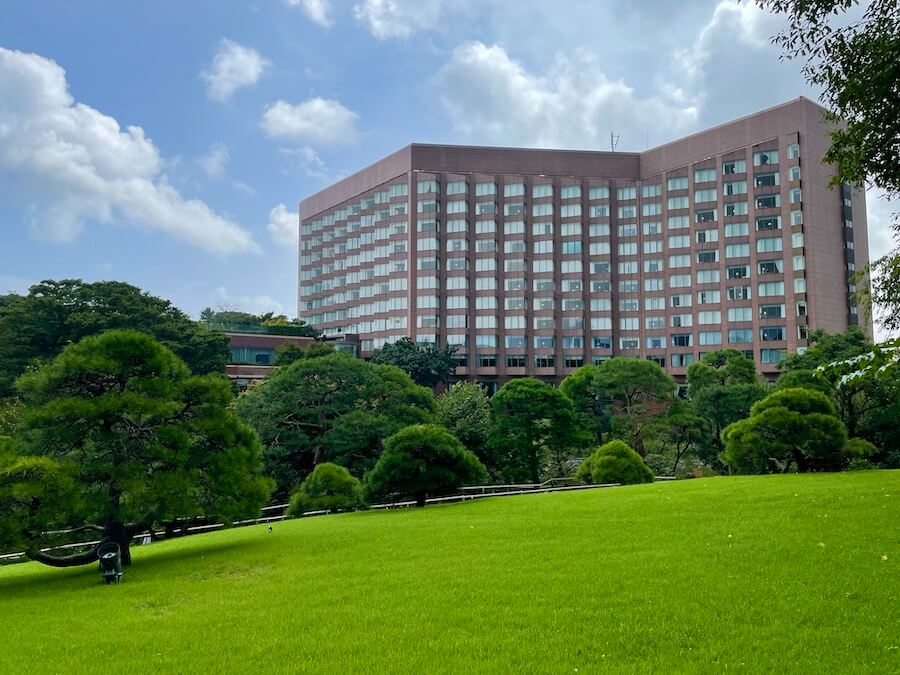 My Arrival And Check-in

My arrival at Hotel Chinzanso Tokyo felt like arriving at a palace located in the forested hills of Tokyo. You see, this hotel’s strongest selling point, in addition to its high level of luxury, is its excellent location.

It is situated on a hill next to the Kanda river and surrounded by trees and a garden, which makes it feel like it doesn’t belong to the rush of Tokyo. Yet it stands here relatively close to many of the city’s most exciting locations.

I was quite impressed by the size of the hotel itself when I got there. It’s made up of two buildings, the hotel building and the banquet building. 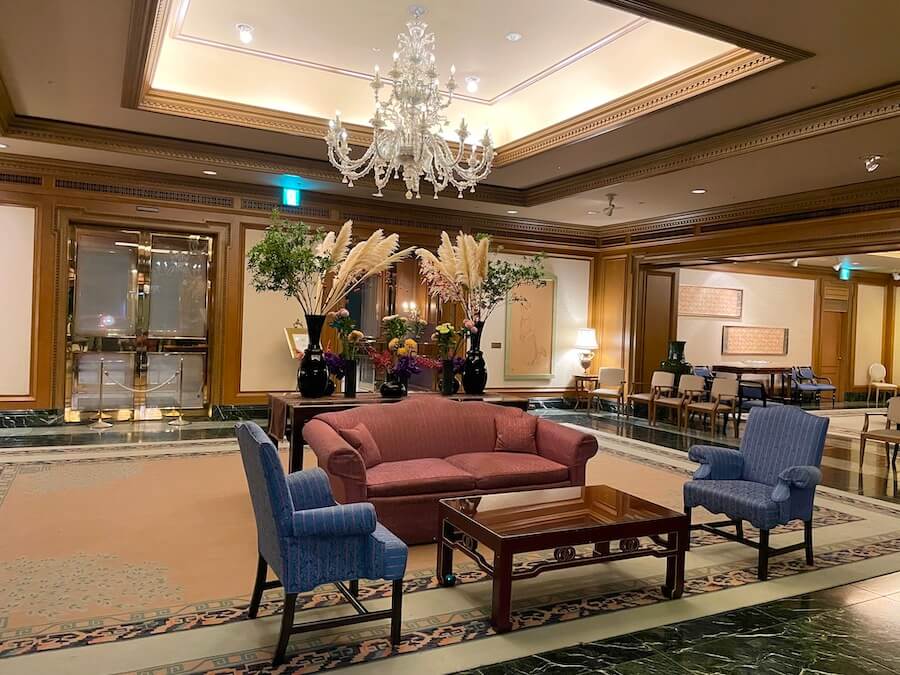 When I got to the hotel, I immediately felt like I had arrived at a special place. I slowly made my way into the hotel lobby and the desk to check into the hotel. There were many people around as it was a sort of rush hour for check-ins.

But despite that, the check-in procedure went smoothly. Staff members explained to me all I needed to know about the hotel, especially about the garden, which I found very interesting and wanted to experience it fully. They were even so kind as to offer to book dinner for me in one of the hotel’s excellent restaurants, which I gladly accepted.

When the check-in process was completed, the staff members escorted me to my room. 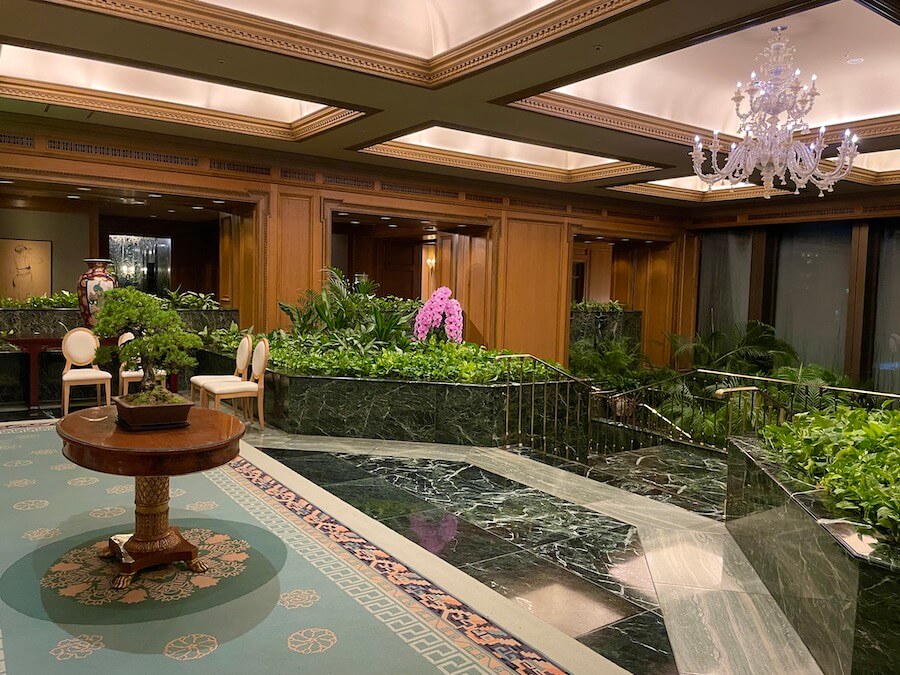 Great Room With An Amazing View

As you would expect from such a prestigious and luxurious hotel such as Hotel Chinzanso Tokyo, the room I stayed in was amazing. Not only was it spacious, had large beds and everything I needed, but it also had a spectacular view through its really unique-looking windows.

You see, all of the windows on this side hotel are basically at an angle and make almost a square shape, which I found quite interesting. It’s difficult to explain in exact words, so it’s best if you take a look at the photo and see for yourself. This unique design enables you to see into parts of other rooms located on this side of the hotel. 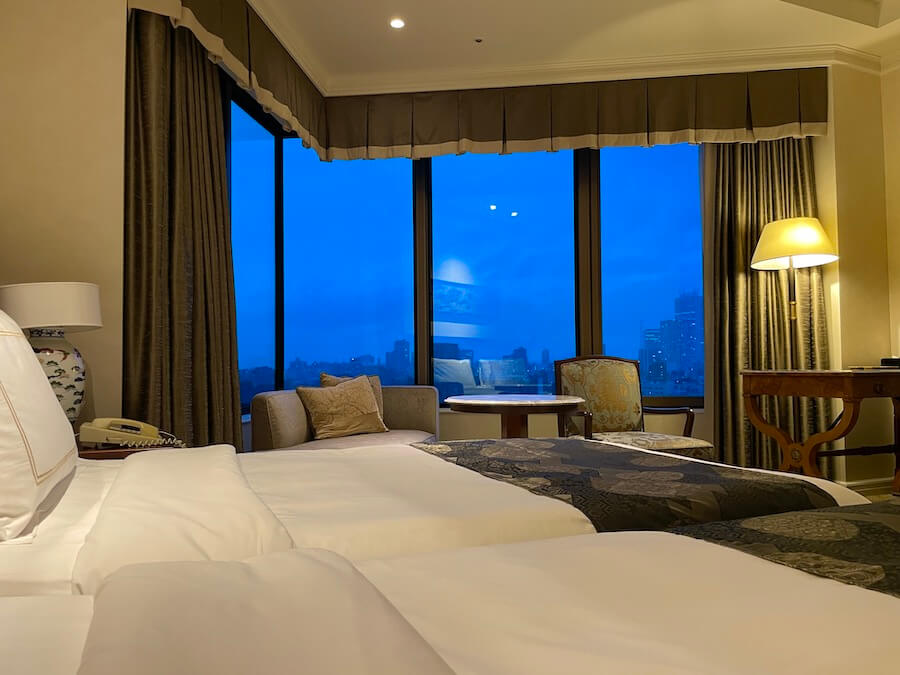 I loved this feature and spent some time relaxing by the window enjoying the view. At that time of my check-in, many other people were also checking in and experiencing the same thing I was. So we were waving to each other, smiling and enjoying the spectacular view, and I really felt connected with other guests in a way I have not in any other hotel.

Of course, the window curtains can be closed easily to provide you with all the privacy you need. The view was spectacular. Not only was the famous Chinzanso garden located right in front of me, but in the distance, I could see the lights of Tokyo’s downtown area.

At the time of my arrival, a typhoon was approaching the Tokyo area, so it started to rain. It made the whole view feel a little bit more mysterious and magical. 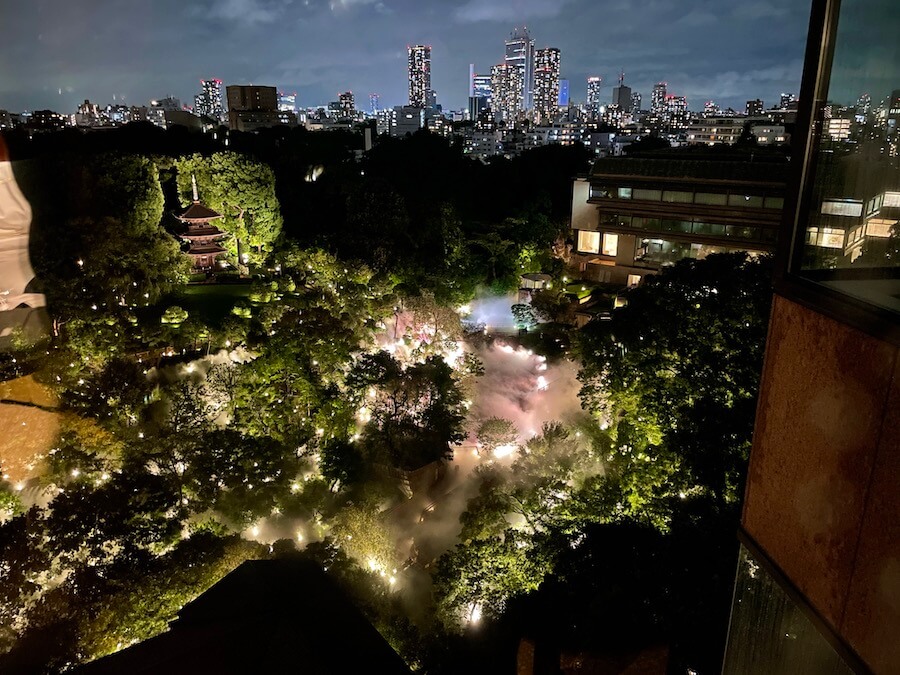 One more thing I loved about my room was the absolutely large bathroom. It has a spacious walk-in shower, a large bathtub, and a big bathroom counter. Additionally, there was a Japanese toilet that had its own separate room. I love having a large spacious bathroom, as I’m sure you do as well, so it was a big plus. And I have to say this one was one of the best I visited during my trip.

As for other amenities, the room had everything you would expect of such a luxury hotel. Overall I was delighted with my room. As I said before, the typhoon was approaching the Tokyo area, so I decided to spend the entirety of the day just relaxing in this great room, working a bit, and exploring the hotel itself. 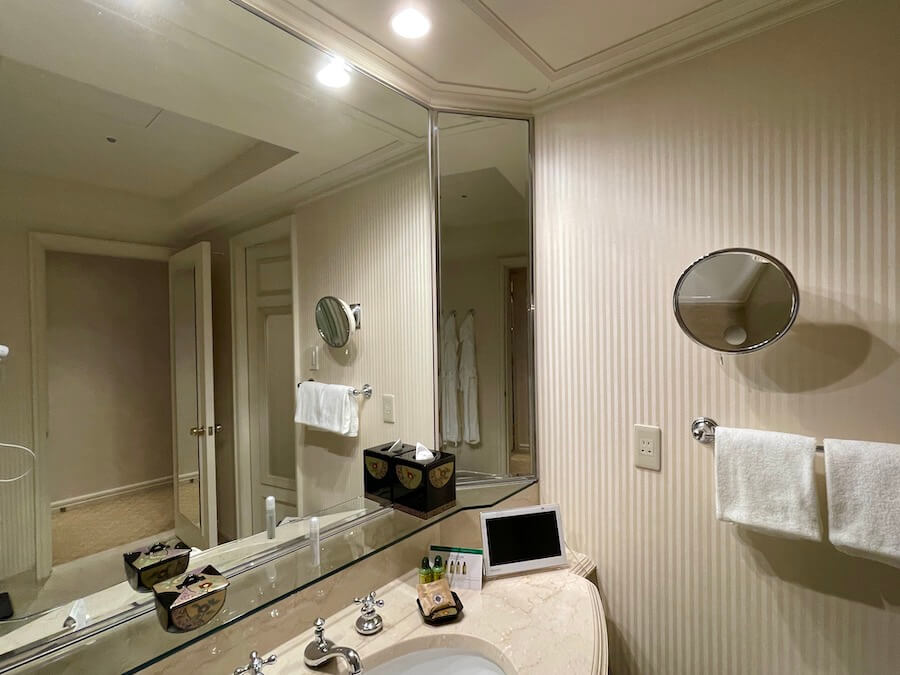 Japanese Garden And The Sea Of Clouds

First of all, the hotel is located on top of the hill. So when the clouds are low, for example, during the rain, the air currents create a spectacular show of swirling clouds that go above and around the hotel. I had the chance to experience this firsthand during my stay. It’s one of the sights I will remember for a long time.

But another reason why it’s called a hotel in the clouds is its spectacular garden with a unique feature. It has a long and proud history, as the hotel itself does. And on the garden grounds, you can find many interesting structures, such as a shrine and an iconic pagoda that is said to be hundreds of years old.

Some additional highlights of the garden include a vermilion traditional Japanese bridge, a beautiful pond, interesting statues, beautifully decorated forest paths, and several excellent restaurants. But the thing that makes this garden stand out from all other traditional Japanese Gardens I visited is its “Sea of Clouds“.

The hotel uses the latest technology to create a veil of mist that enshrouds the garden, which, when viewed from above, looks just like a sea of clouds. Across the garden, there are several vents that release white mist that spreads out across the garden, giving it an otherworldly vibe. 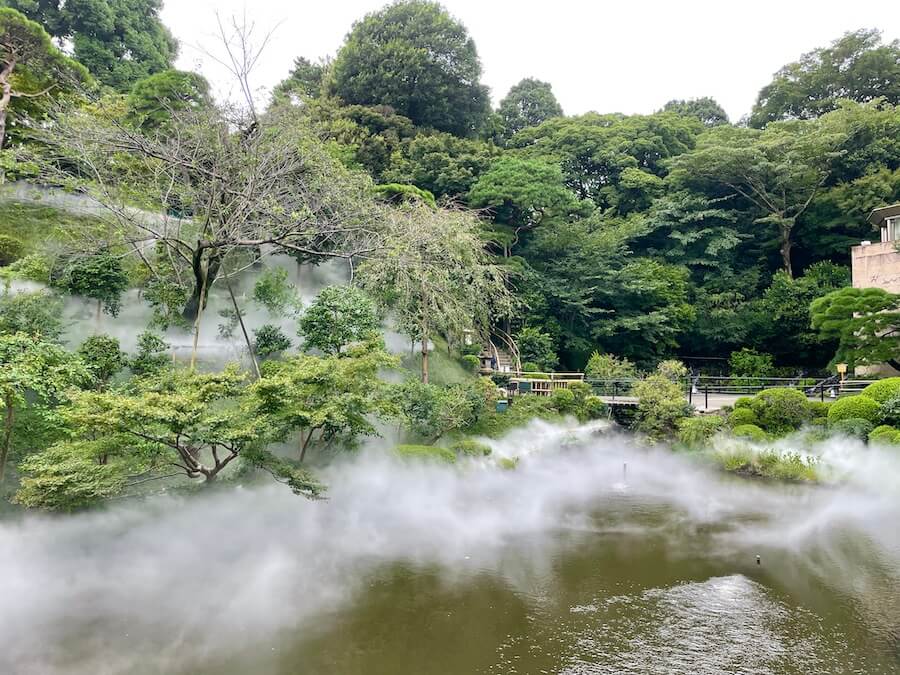 You feel as if the clouds descended directly upon the garden itself. And while you walk there, you truly feel like you have been transported to a magical place. Everything is covered with a thick fog, and you can barely see people next to you. This is an experience that is so difficult to describe in words, and it’s something that you just have to experience for yourself to appreciate fully. I still remember walking through the forested part of the garden, guided only by a few lights. I could barely see through the mist.

I highly recommend it. The mist is released every couple of times an hour at predetermined times. A few specific times are designated as special releases when twice the amount of mist is released. I’m pretty sure I spent several hours exploring the garden both during the day and night, as well as looking at it from my room. 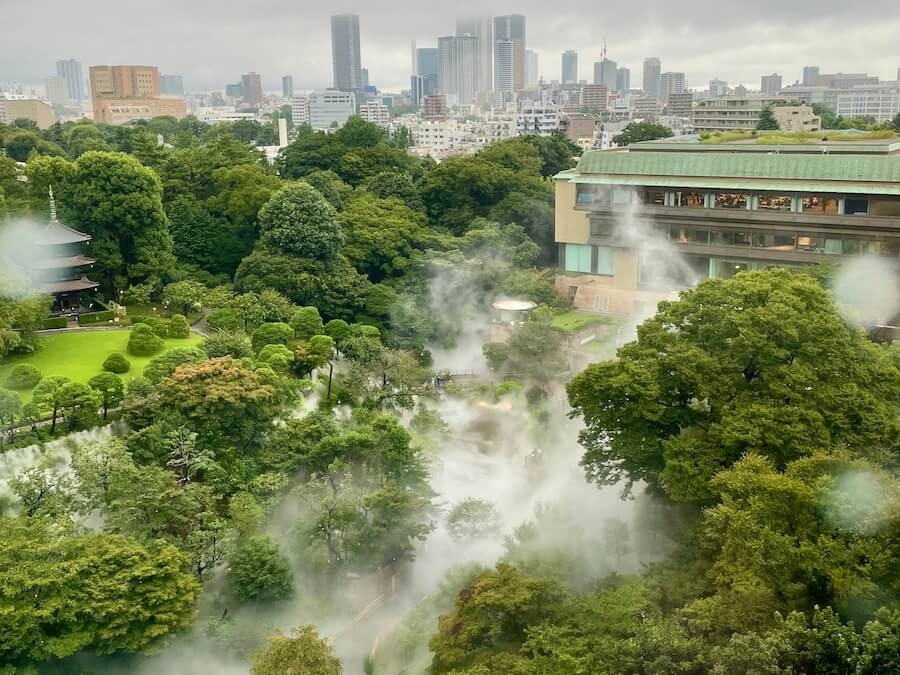 As the night set, I made my way to Mokushundo, a Japanese stone-grilled cuisine restaurant located deep in a quiet corner of the gardens. This restaurant in an old renovated home serves iron-kettle kaiseki cuisine and traditional dishes stone grilled at your table. I had the chance to experience the walk through the majestic garden once again.

Arriving at a small house between the trees, I was greeted by friendly staff members who were all dressed in traditional Japanese clothes. I was seated at a table reserved specifically for me, and one of the chefs quickly joined me. 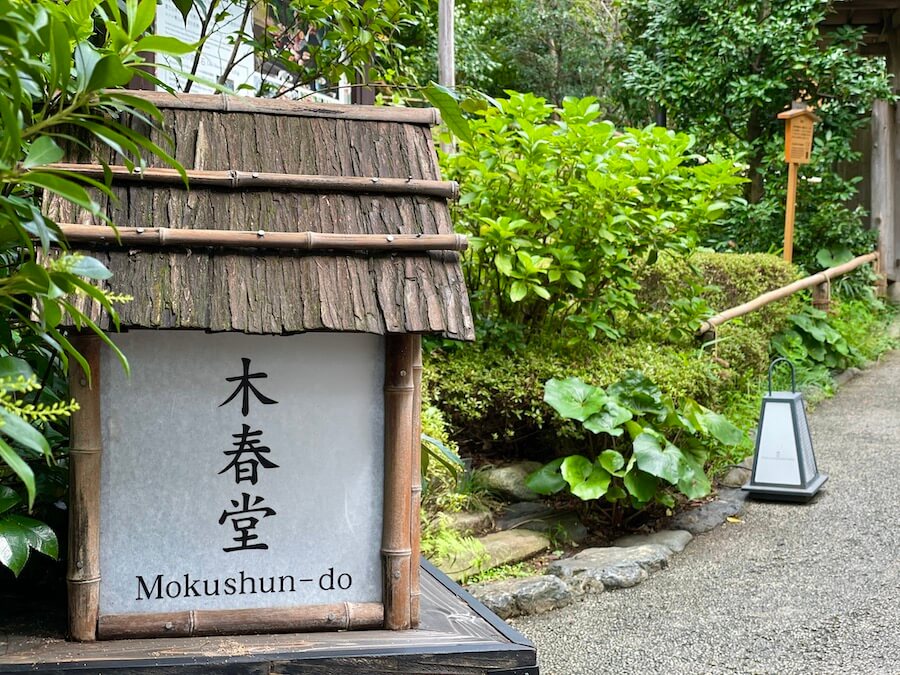 The chef spoke great English, and we quickly found several common topics to discuss while she prepared the food. I loved this stone grilling process since it allowed me to see firsthand how the chef handled the food and how it was prepared.

The dinner included several courses ranging from vegetables and mushrooms all the way to Wagyu beef. I loved the experience, and it was one of the best dinners I had during my visit to Japan. 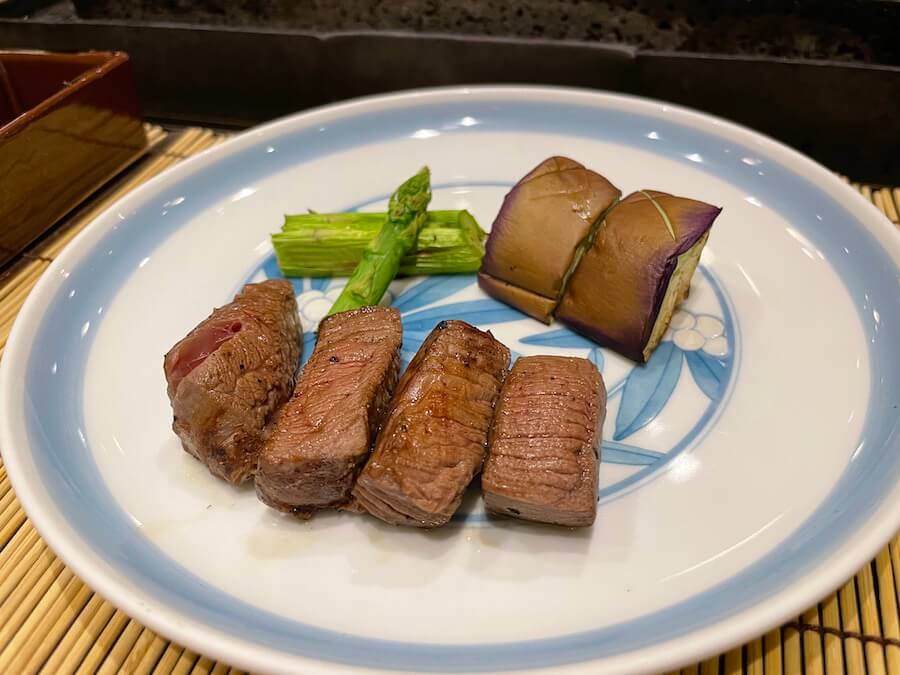 The hotel has several other interesting restaurants, bars, and lounges you can experience during your stay. The restaurants hare served both Japanese food such as the one I visited, as well as Western food. So you’re certain to find something you’ll feel like eating. Some of the most interesting ones are Il Teatro which serves Italian cuisine, The Bistro, which is ideal for casual dining, and Ryotei Kinsui, which offers excellent Kaiseki cuisine.

There is also a Japanese restaurant called Miyuki, where you can enjoy traditional and modern Japanese cuisine in an elegant Japanese atmosphere with a good garden view. I had my breakfast here, and it consisted of colorful and fresh seasonal ingredients. 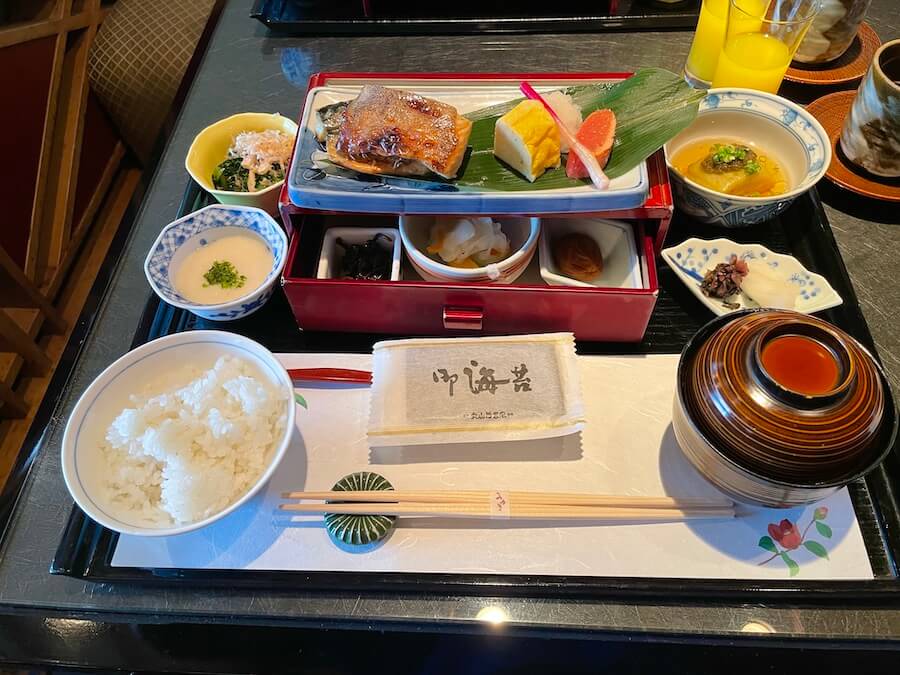 Other Facilites and Activites

The hotel also includes a great spa reserved exclusively for hotel guests, spa members, and treatment guests. It features natural lighting, an all-weather warm pool with a retractable roof, a luxurious jet bath, a Japanese onsen using water straight from Ito, a sauna, and a fitness gym. You all know how much I love to have access to a nice spa and a gym, so this is always a big plus in my book.

There are also many activities and unique cultural experiences you can participate in. These include fan-making experiences, calligraphy, haiku, karate, tea ceremony, and even manga drawing experience. There are too many of them to list here. So I am certain you will find something you like. 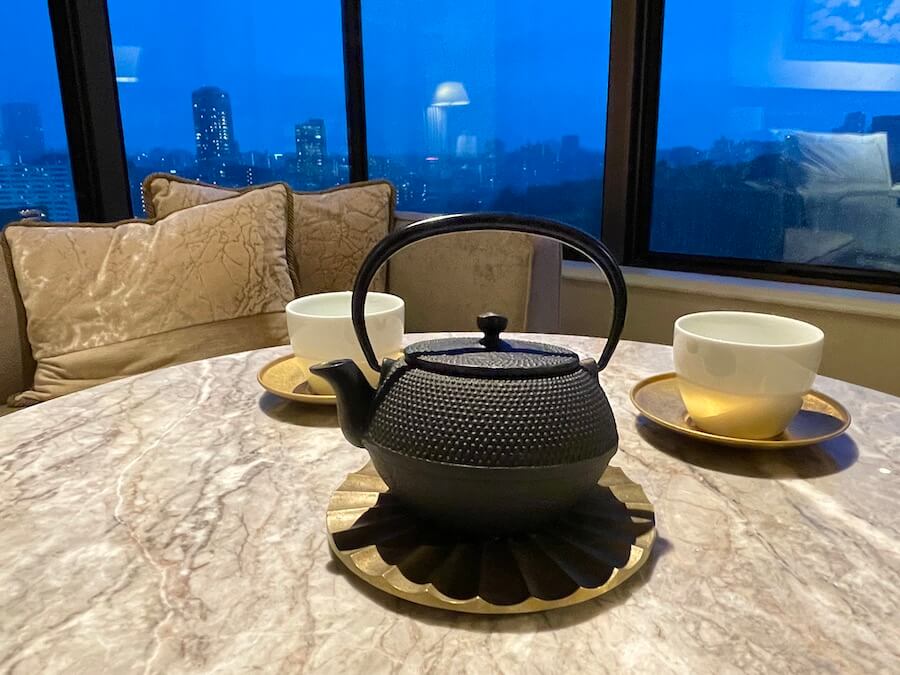 As I mentioned many times before in this blog post, the location of the hotel is quite unique. It’s located in the Sekiguchi neighborhood of Bunkyo, on a small hill surrounded by greenery and with the Kanda river on one side. It feels a bit separated from the rest of the city, which makes it a perfect oasis in a sea of concrete.

It is connected to other parts of the city by several subway stations in the area. You can walk about 10 minutes to the nearest station or take one of the buses there. Also, there is a free shuttle bus that can take you from the hotel to the nearby Ikebukuro station, which is one of the major stations on the Yamanote line. 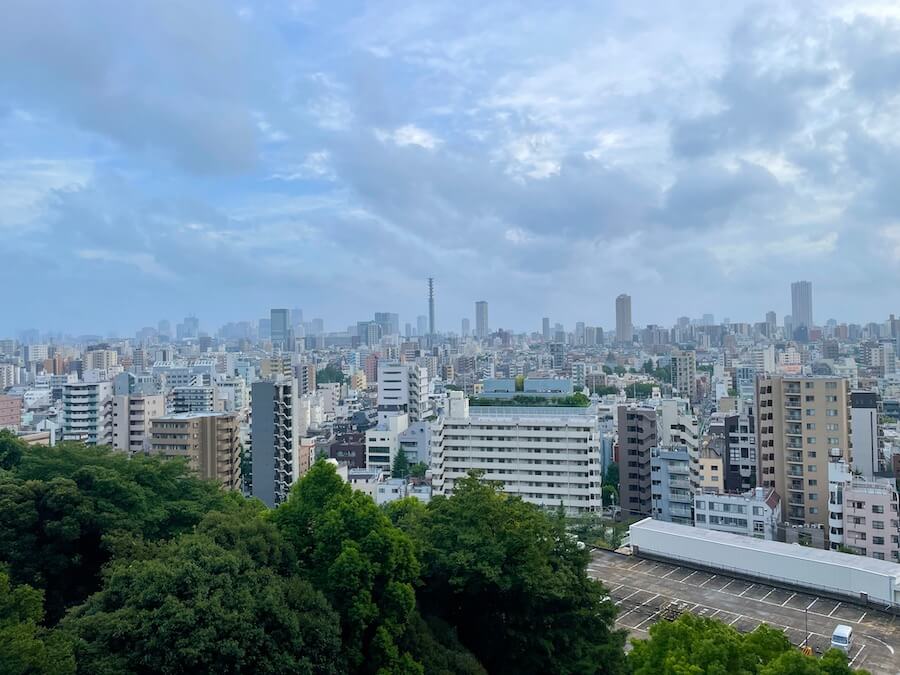 Ikebukuro itself is also an interesting place to visit, full of shopping centers and interesting restaurants. It’s one of the parts of Tokyo that I like the most.

There’s one big point of interest, located right next to the hotel. And that is the large St. Mary’s Cathedral, the seat of the Roman Catholic Archdiocese of Tokyo. It has a distinct design since it’s made out of concentrate and steel plating, and its eight walls are both walls and roofs at the same time. 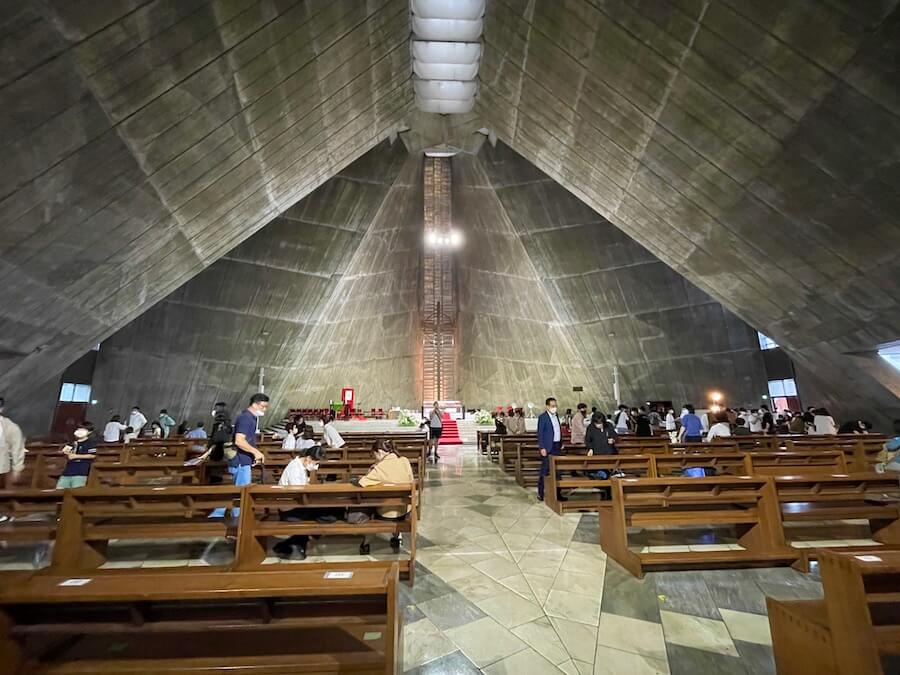 All in all, my visit to the Hotel Chinzanso Tokyo is something I will remember for a long time. Especially the breathtaking garden and the Sea of Clouds I witnessed there.

So if you are looking for a peaceful luxury hotel in Tokyo with great dining options and service, this is the place for you. Make sure to check out their website to learn more!

Where is Hotel Chinzanso Tokyo?